Hundreds turned out for a pro-choice, reproductive rights rally in downtown Juneau on Saturday. (Photo by Greg Knight)

Juneau, Alaska (KINY) - Hundreds of pro-choice advocates turned out Saturday afternoon to protest the overturning of Roe v. Wade by the U.S. Supreme Court this past week.

The rally came the day after the U.S. Supreme Court ended federal constitutional protections for abortion that had been in place for nearly 50 years, in essence returning the abortion question back to state legislatures and courts.

Rachel Gearhart, one of the organizers of the event, spoke to the crowd.

"We are disappointed; we are crushed," Gearhart said. "We know you are too. We are tired of the devaluation of people with uteruses, we fear about how the young people will make a life when faced with an unplanned or unsafe pregnancy, and we know you are too. We are mad that, in a country with many injustices, that there is one more way to negatively and disproportionately affect the lives of persons of color. People who experience homelessness, LGBTQI, two-spirit persons, immigrants, and on and on."

Gearhart says more women need to speak up in support of reproductive rights.

"Look at all these people here, we are too small a group of like-minded women who want to ensure that safe legal abortion is available to anyone who wants it or needs it, anyone, anytime, anywhere," she said.

Representative Sara Hannan also spoke to the crowd, saying, "To those of you who've been doing this for 49 years, I am so sorry that any of us that weren't there in 1973 took this for granted. My mother, my very Catholic mother, when I was 12 said to me, 'You now have rights that no women before you have ever been able to exercise. Use them.'"

Hannan told the crowd that she fears Gov. Mike Dunleavy intends to stop abortions in Alaska.

"The man that currently has the office of governor has already said in the press that if he's re-elected, he intends to introduce a resolution for an amendment to ban abortion," Hannan told the crowd. "Our privacy rights in our constitution are explicit and unique, and we need to defend them, and we need to extend that to others."

"There's not much good to say about that God-awful Supreme Court decision yesterday," Kiehl said. "I spent the whole day reading it, and it's crap. The history is flawed, the reasoning is junior high level, and it is just the first step for what they have planned." 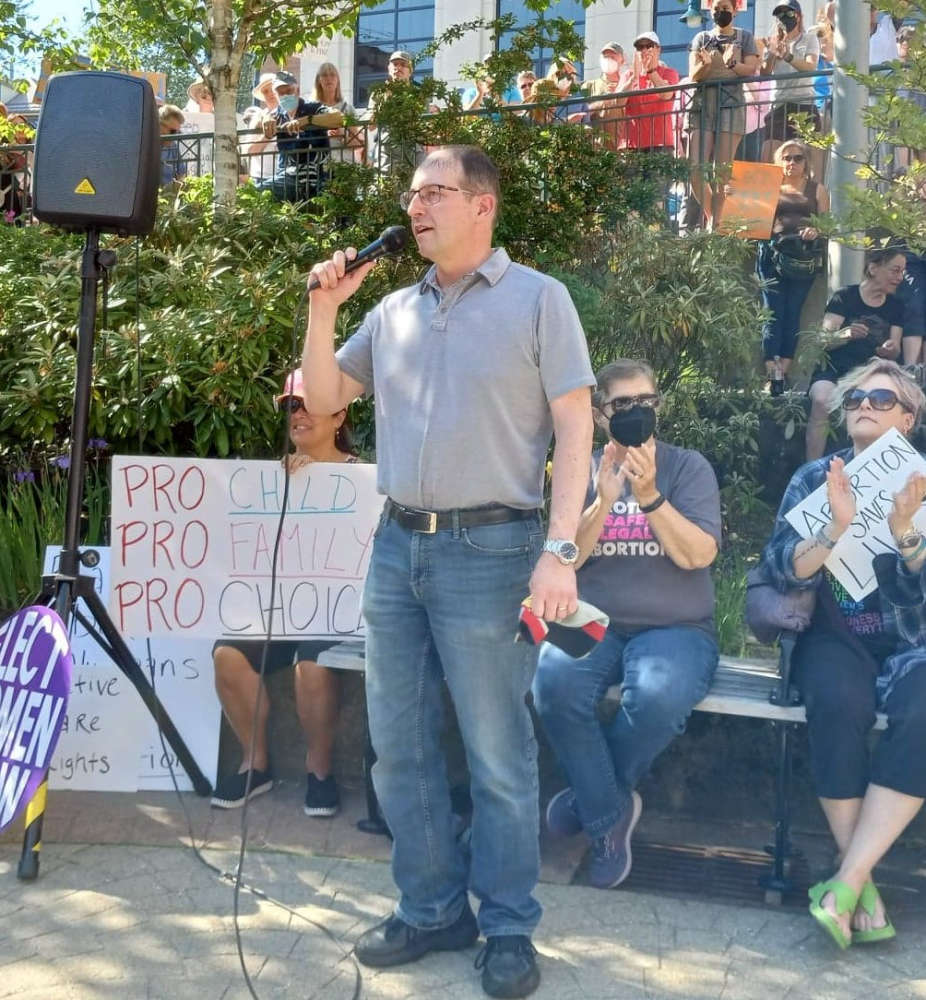